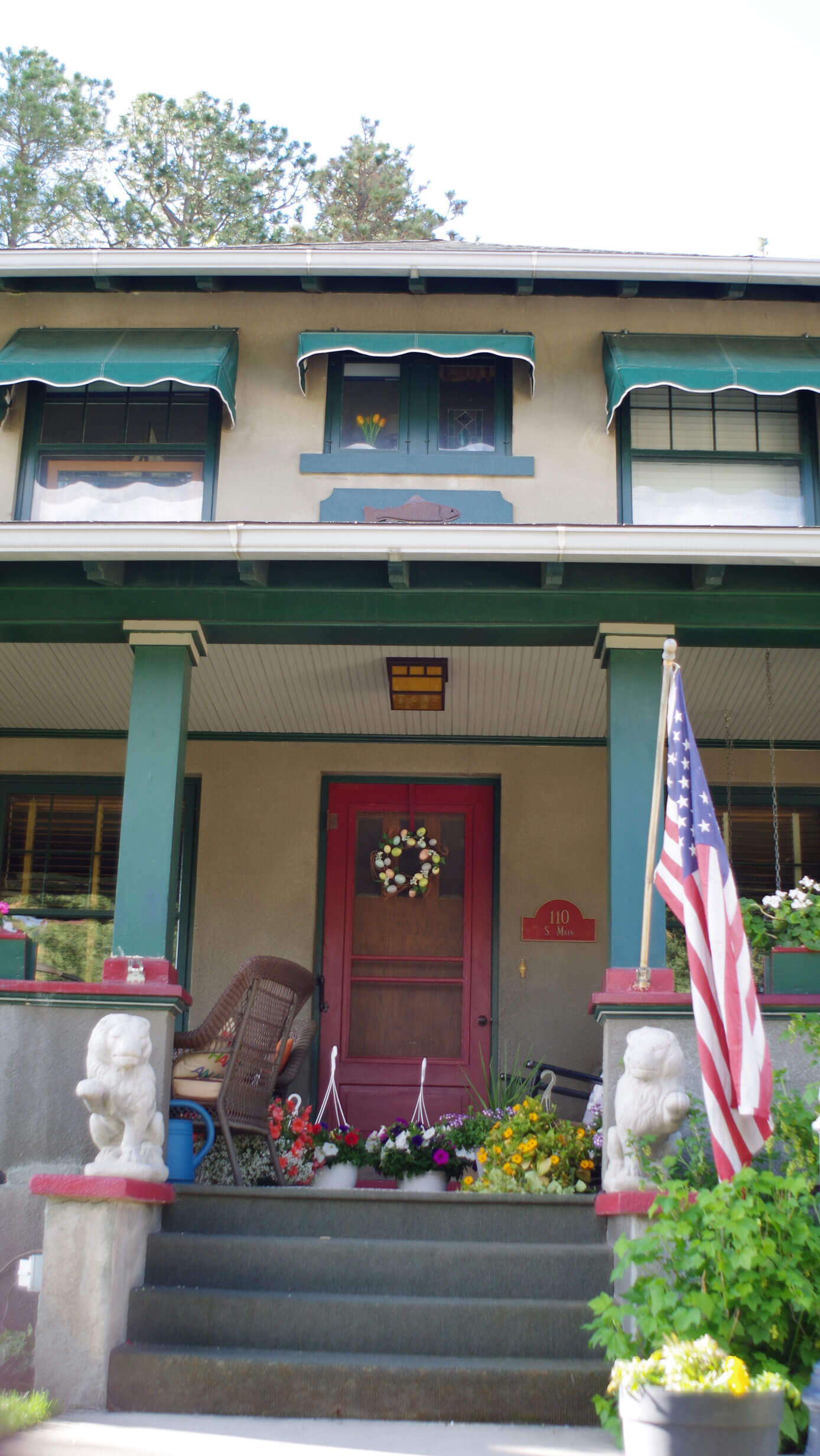 F.W. Brown came from Galesburg, Illinois to the Black Hills in 1896. Mr. Brown started his first drug store in Lead in 1900. This was located at the corner of Main Street and North Bleeker Street, long since removed.  Mr. Brown constructed his home at 110 South Main Street in 1915.  The home had Prairie School Influence and was constructed of clay block and stucco.  An addition was added in the 1930’s.

The following article was published in 1926 and is provided Courtesy of South Dakota State Historic Preservation, Historic Site Inventory.

“F.W. Brown started his first drug store 26 years in Lead and during those years has built up an extensive business with stores in three towns, Lead, Deadwood and Belle Fourche.  Mr. Brown was born in Galesburg, Illinois, and at the age of 16 started to learn the drug trade.  He worked in drug stores in South Dakota and Iowa and in 1896 came to Lead where he was employed by the Dickinson Drug Company.  In 1900 he established his Lead store in the Masonic Temple.  For years he spent his time building up the Lead business until it became well known in the Black Hills for its fair dealings and honest policy.

When Mr. Vessy became governor of South Dakota, he appointed Mr. Brown a member of the state board of pharmacy and he served upon the board for seven years, with ability and utmost satisfaction.  During the administrations of Governors Byrne and Norbeck he was a member of the state board of charities and corrections.  It was largely due to his energy and business ability that the State Tuberculosis Sanitarium at Custer is one of the finest modern institutions of its kind in the west.  The institution was built during the time of World War I when it was practically impossible to get contracts for buildings.  Mr. Brown saw that the buildings were put up and hired the work done, employing men by day, necessitating an exceptional amount of care and attention on his part. 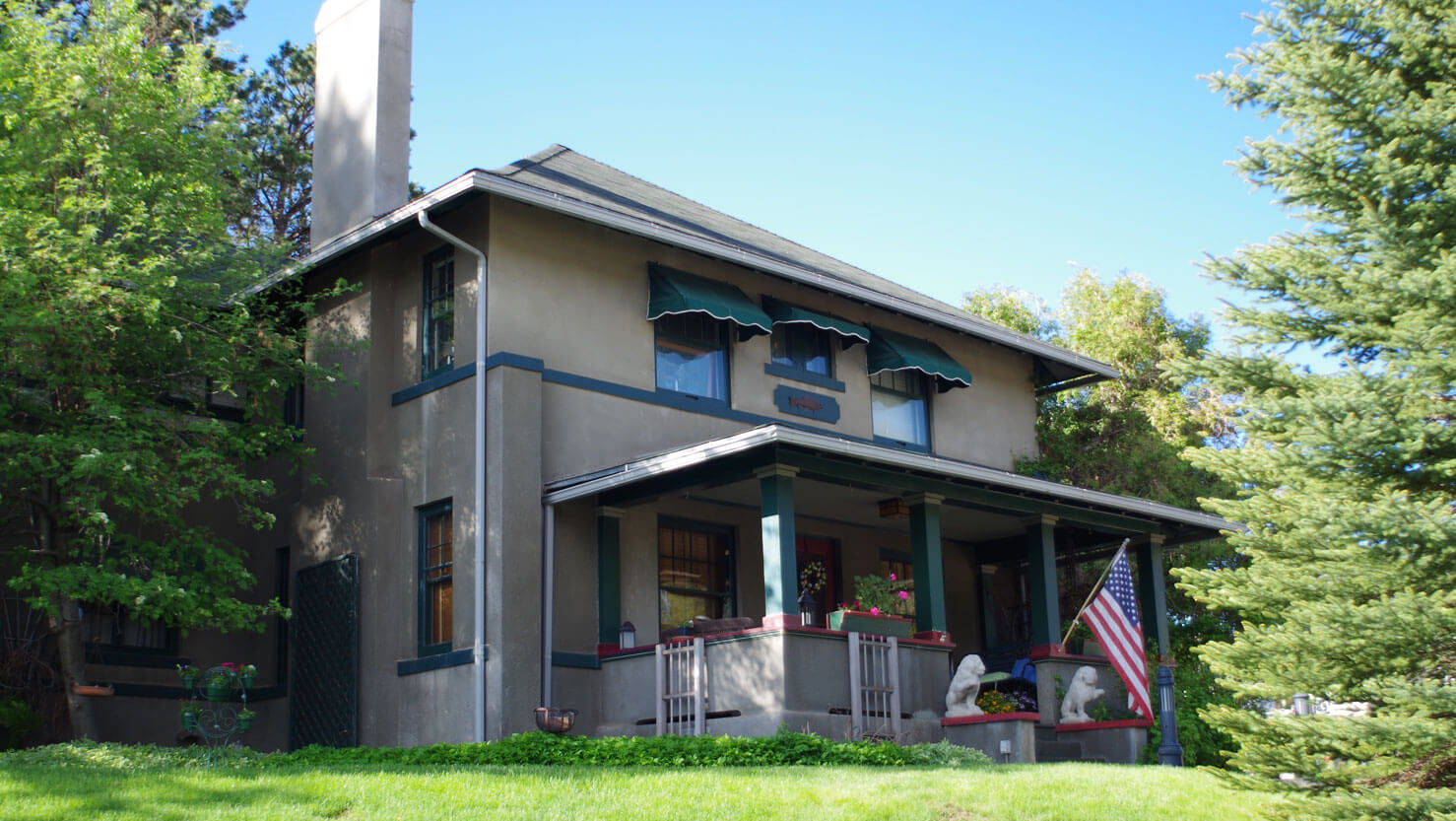 In 1919, Mr. Brown decided to enlarge his business and bought a drug store in Belle Fourche.  He at once enlarged and completely remodeled it, making one of the most modern stores in South Dakota.  In 1924 he purchased the old Kirk Phillip Drug Company store of Deadwood.  This drug store was established in pioneer days and was well known to residents in this section since the early days.  Mr. Brown moved the stock to the Treber Building on Main Street and with new fixtures and equipment established a modern store.

In 1926 the Lead store was enlarged and a modern soda and ice cream fountain was installed.  Using the Frigidaire refrigerator system, which automatically controls the temperature, he has one of the most modern fountain services in the country.  All three of his stores have been equipped with modern fountains and the service in the best kind possible as Mr. Brown has experienced and courteous operators in charge.

The Brown Drug Stores enjoy a large prescription business.  In the filling of prescriptions only pure drugs are used and the patrons are charged reasonable prices.  His stores are stores of quality and the line of drugs is complete.

Mr. Brown is married and lived in Lead.  He has three children, Miss Elizabeth is a graduate of the Lead High school and studied pharmacy at the University of Minnesota; Vernard is a student of Shattuck Military School and works in his father’s stores in the summer; and Henrietta, lives with her parents in Lead and is also active in the business.  In 1915, Mr. brown built a beautiful home on South Main Street where he and his family live.  It is one of the most beautiful residences in the Black Hills.

The Brown Drug Stores, Inc. is the name under which the string of three drug stores are conducted, the business having been incorporated in 1924.  The stores now have 13 people on the payroll.  John Dignan, manager of the Belle Fourche store has been connected with Mr. Brown for 15 years.  He began his work in the Lead store and when the business at Belle Fourche was purchased Mr. Dignan was placed in charge.  He is an experienced man and a first rate business man and is well known and liked by people all over the Hills.

All three stores handle the nationally famous lines of Rexall products, known the world over for their excellence.  Toilet articles as well as household remedies are found in the list of products sold by the Rexall Stores.  Rexall products are sold in practically every important city in the country.  Mr. brown is the president of the state Rexall Club.

Mr. Brown has been an ardent Black Hills and Lead booster during his many years residence hers and was a director of the Commercial Club for years.  He is now a member of the commercial clubs of Lead, Deadwood and Belle Fourche, and the Lions Club.  He is also affiliated with the Masonic bodies and the Elks, as well as other fraternal organizations.”