The Homestake Gold Mine was a success for over 125 years, becoming the flagship of the Homestake Mining Company which existed as a separate corporation until 2002.  The Homestake Mine provided employment and community that stood the test of time.  Today, many miners and their families still remember the community and company as one.

Underground at the Homestake Mine
Photo Credit – Fassbender Collection

The Homestake Mine was once called the “Richest 100 Square Miles” on the Earth.  The original ore body was discovered in 1876, in Bobtail Gulch south of present day Central City, by the Manuel Brothers, Fred and Moses, Hank Harney and Alexander Engh.  In 1877, the original claim was sold to George Hearst, who named the claim Homestake.  The Homestake Mine was in continuous operation for 126 years; over that time the miners extracted 41 million ounces of gold and 9 million ounces of silver.

The first ores were mined on the surface, finding the gold in the surface exposures of the mineral veins.  Numerous exploration and production trenches were hand-hammered out, chasing the veins as they began to go deeper.  The original hillsides allowed small tunnels to be driven below the ore veins, capturing as much gold as possible.  Some tunnels caved into neighboring tunnels creating small “glory holes”.  It soon became obvious that the gold lay deeper and the need to mine underground became obvious.

Homestake miners started with candlesticks, mules and hammers and finished mining operations using state-of-the-art pneumatic, electrical and hydraulic equipment.  Thousands of men and women worked for the Homestake Mine, many living in Lead and developing the community

life among the drifts

Underground mining is dangerous.  Numerous mining methods have been developed that provided maximum gold recovery and protected the underground miners.  George Hearst brought the square-set timber mining method to the Homestake Mine from his Comstock operations in western Nevada.  This method used numerous interlaced timbers to provide both safety and access to the ore bodies.  The ore bodies were mined upward.  As the excavation progressed vertically, the void was filled by the timber sets, essentially a lattice work of wood stabilizing the opening and accessing the ore body.  When the ore body was “spent” another area was accessed, either horizontally or deeper and the process was repeated.

Over time, mining methods changed.  Engineering design, ground control, scheduling and equipment all played an important part in improving the mining methods.  Safety became paramount in all Homestake Mine operations, not just underground.  But, for the most part, one thing remained the same, the ore bodies were mined vertically upward.

Nonetheless, fatalities occurred; over 400 miners lost their lives at the Homestake Mine, many killed by falling rock or just by falling.  Homestake remained diligent regarding safety and numerous techniques, equipment and practices were developed over the years by the miners, supervisors, engineers and managers.  Homestake ended it storied career as one of the safest mines in the world. 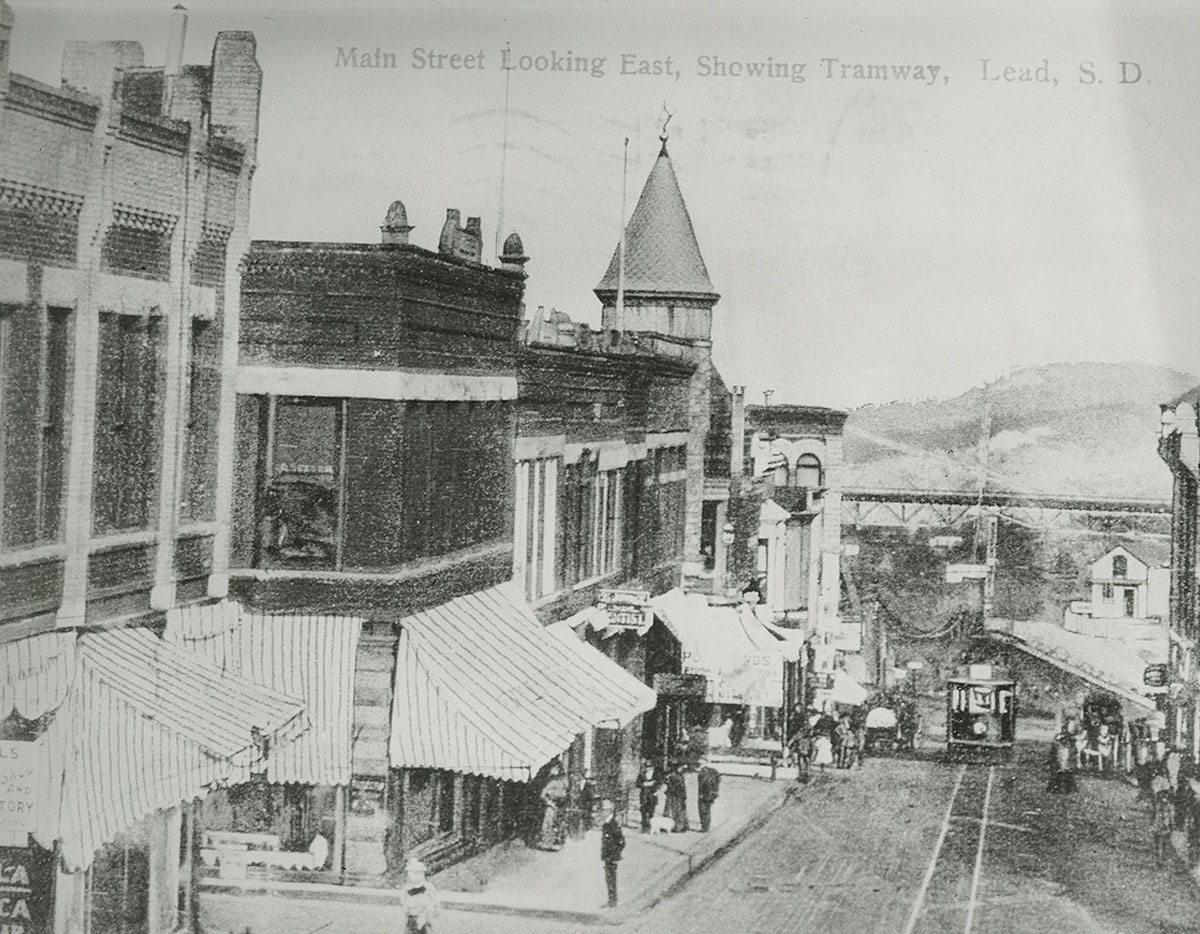 The City of Lead was developed immediately following the first gold strikes in 1876.  Settlement streets were laid out in July, 1876 and incorporation followed in 1877.  The families of miners flocked to the community, bringing needed skills and industry.  Doctors, dentists, shopkeepers, newspapermen, photographers, lawyers and restaurateurs set up their operations within the community.  Schools, churches, hospitals, fire departments and fraternal organizations all were organized.  The railroads soon laid tracks and spurs throughout the City of Lead.

The languages spoken in Lead were numerous:  Welsh, Finnish, Italian, Slovakian, Croatian, German and English, amongst other languages, were heard throughout the community.  Newspapers were published in these languages, advertising foods, dry goods, health and beauty, medicines, railroads, restaurants and clothing.

Electricity came to Lead in the 1888 courtesy of the Homestake Mine and the Hearst Mercantile Company.  Soon electrification became community-wide in the 1890’s as Homestake developed hydroelectric plants in several areas, including Spearfish Canyon.

For decades, the community flourished.  However, mining soon caught up with the town of Lead.  Beginning in the 1920’s several areas of Lead began to subside due to the proximity of the underground mining operations.  The near surface pillars left in the underground sections of the Homestake Mine began to fail and this resulted in buildings subsiding, roads caving and general disarray in the commercial area of Lead.  Parts of the town had to be demolished and abandoned.  This subsidence period reflected changes in the community.  Not as many businesses remained and concerns existed that the subsidence would continue to expand. 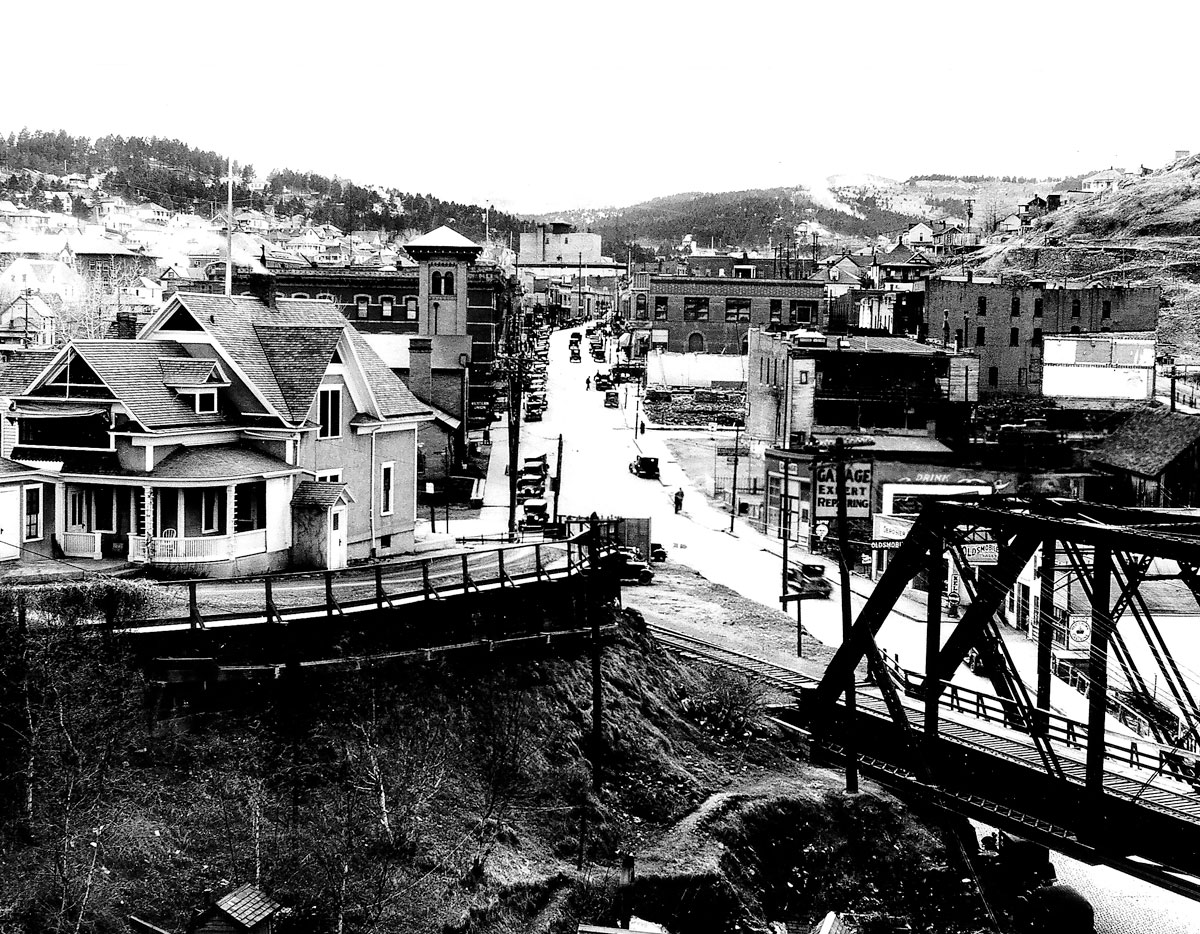 Following the subsidence period of the 1920’s the community of Lead settled down.  The Homestake Mine continued operations, going deeper and bigger.  The town began to flourish in its new location.  The Depression did not have as much as an impact on Lead as it did on the rest of the nation.

World War II changed a few things.  Men were called to duty, gold mining was suspended from mid-1943 until the end of World War II and Homestake supported the war effort through its surface operations; including the fabrication of hand grenades.

The community of Lead remained strong.  Outdoor recreation became important to the citizens.  Hunting, fishing, skiing and hiking all took hold and remain an important part of the local lifestyle.

Entertainment was important.  The Homestake Opera House, first built in 1914 was destroyed by fire in 1984 and through community efforts has been undergoing restoration ever since.  It remains the premier live entertainment venue in the community.

But, economics did not allow the Homestake Mine to operate past 2002.  Low gold prices and high production costs, exasperated by smaller underground ore bodies caused the mine to close in 2002.  The community of Lead was devastated.

But, nothing lasts forever, even devastation.  The community of Lead has moved past in mining history and has entered a new phase of community—science, recreation and business are now in the forefront of Lead. 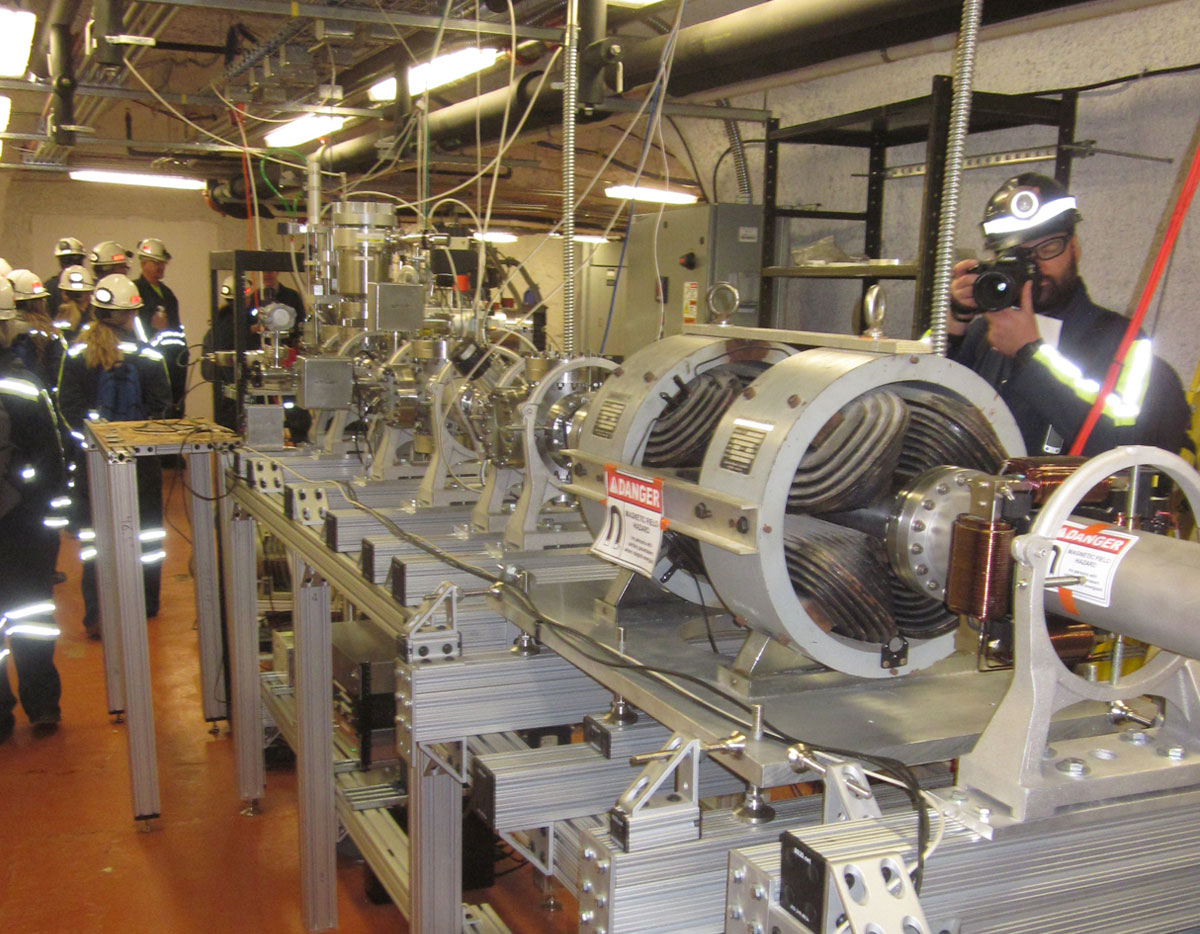 The Homestake Mining Company also supported innovative science.  In 1965, Dr. Ray Davis constructed an underground experiment that studied neutrinos in the universe.  The experiment was built on the 4850 Level of the Homestake Mine, after Homestake miners excavated a cavern dedicated to the Davis-Homestake Experiment.  His revolutionary work resulted in a Nobel Prize in Physics in 2002.

This experiment, and the resulting opportunity created by the closing of the Homestake Mine, has allowed the development of numerous science experiments that require that the influence of the sun be negated.  The depth of the Homestake Mine provides that protection.  Today, experiments looking for dark matter, biological anomalies and further neutrino studies are occurring in the Homestake Mine.  Scientists, students, technicians, engineers and educators, from all over the United States and the world, all are convening in Lead, not unlike the numerous ethnic citizens that first developed the community of Lead.